October 25, 2017 by MTR Custom Leather in Weapon News with No Comments

If people are sincerely interested in reducing the number of children that are killed with guns in the US, it will serves them to lie about the numbers.

Arizona -(Ammoland.com)- If people are sincerely interested in reducing the number of children that are killed with guns in the United States, it ill serves them to lie about the numbers.

It creates distrust in everything that they say. It creates suspicion about their real motives.

In a story out of Flint, Michigan, the reporter claims that “the agencies” say that more than 7,000 children are killed every year in the United States “from” unsecured guns.

The Bureau of Alcohol, Tobacco, Firearms and Explosives and the Flint Police Department are passing out 300 gun locks to keep children safe.

The agencies say more than 7,000 children are killed every year from unsecured guns in the United States.

That number is false. The total number of people under the are of 18, who were killed with firearms, unsecured or not, was 1458, about 20% of the claimed figure.  It is unknown how many of those were with “unsecured” firearms. The term “unsecured” is undefined in the story.

A quick check with WISQARS, the database maintained by the CDC, shows the real numbers for the last year available, 2015.

From the  Center for Disease Control (CDC) for 2015, the latest year available, 77 people under the age of 18 were killed in fatal firearm accidents that year. It is unknown how many of those firearms were unsecured. Clearly, many were secured, as many of those fatal accidents occurred at the hands of an adult.

566 people under the age of 18  killed themselves in a suicide with a firearm, according to the CDC. How many were in legal possession of the firearm when they committed suicide is unknown.

The total for all the deaths of people under the age of 18 from someone using a firearm, according to the CDC, was 1458, so 50 deaths occurred where the intent was unknown.

John Lott, in research designed to see if laws requiring firearms to be locked up reduced deaths where a firearm was used, found no effect on juvenile deaths. However, violent crime and property crime increased.

Abstract: It is frequently assumed that safe-storage gun laws reduce accidental gun deaths and total suicides, while the possible impact on crime rates is ignored. We find no support that safe-storage laws reduce either juvenile accidental gun deaths or suicides. Instead, these storage requirements appear to impair people’s ability to use guns defensively. Because accidental shooters also tend to be the ones most likely to violate the new law, safestorage laws increase violent and property crimes against law-abiding citizens with no observable offsetting benefit in terms of reduced accidents or suicides.

The research does not show the effect of private efforts to handle firearms safely. Safe storage can be part of that effort. Private efforts to increase gun safety, overall, seem to have been effective. The rate of fatal firearm accidents in the United States has been reduced by 94 percent in the last 85 years.

©2017 by Dean Weingarten: Permission to share is granted when this notice is included.

The NEW A-5V Vertical Draw Deluxe Full-Size Quick-Snap holster is hand crafted with double military directional steel snaps on each leather strap for double the security. Features about the A-5V: leather reinforced mouth piece to help retain the holster opening for easy re-holstering. Sweat shield or body shield is a key feature to help protect you from the sharp edges on the weapon; while also protecting the weapon from your body oils and sweat. The New Vertical Draw Deluxe Full-Size Quick-Snap fully conceals the full length of the weapon while carrying OWB. Each holster comes with a deep mold of the outlines of the specific firearm, which is only done by a technique called hand boning. This technique is created by one of our professional leather craftsman to ensure a proper fitment of the weapon for long term use. 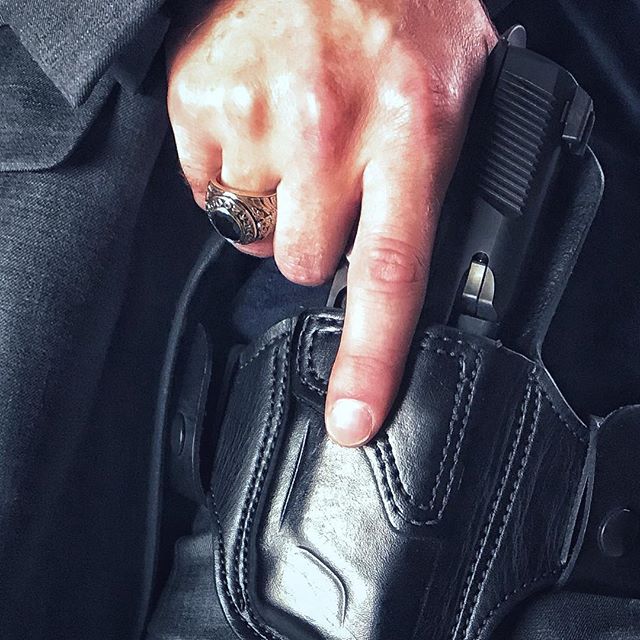 Our mission is simple, we strive to build the highest quality products and offer them at the best possible price to the consumer. It doesn’t matter if you are simply a gun enthusiast, a competitive 3 gun shooter or a military or law enforcement professional, our rifles will serve you well and won’t let you down when it counts and we guarantee it.

We use only the highest quality American made materials, you will never find inferior imported materials in our rifles, we just won’t allow it. We are shooters, just like most of you and we won’t sell anything that we, ourselves, wouldn’t trust our lives on. Cutting corners is not allowed in our shop and attention to detail is never to be neglected. It is our rule that quality control is everyone’s responsibility, from the guy who unloads materials off the delivery truck, to the armorers who build the rifles, to the person who boxes up the product before it is sent to the customer, every member of our staff is responsible for QC and inspections are conducted at every level of production.

We have a good time doing what we do, it is our passion and we appreciate each and every customer. Please feel free to give us a call or pay us a visit if you have any questions regarding any of our products. We are like a big family here at Spikes Tactical and our door is always open.

Thank you for your interest in our company and hope to hear from you soon.

October 2, 2017 by MTR Custom Leather in Uncategorized with No Comments