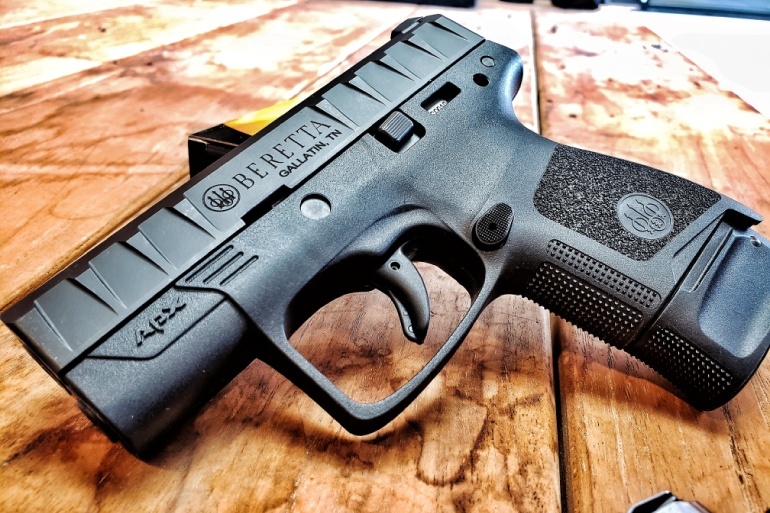 Beretta’s APX striker-fired 9mm is a top-tier duty gun; one that I can’t help but feel is oft-overlooked. But not by Jon Wayne Taylor, who liked the RDO, Centurion, and Compact to the tune of a strong 4 stars or by Dan Zimmerman, who gave the Full Size a full-on 5 stars and often carries it while out-and-about.

Though I don’t hear the APX come up in gun shopper conversation often, all other indications are that it’s a strong seller for Beretta. It’s about to get stronger, too, now that the APX Carry adds a single-stack sub-compact to the family. 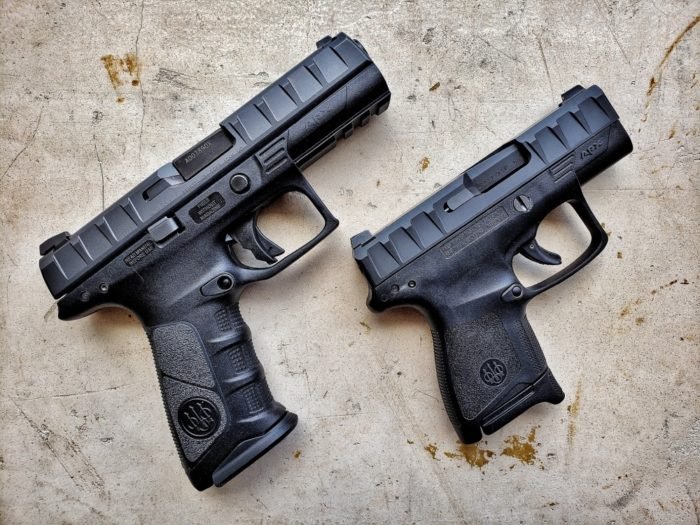 In 2019, a full-line pistol almost has to include a model under about an inch thick. The U.S. gun-buying market just can’t get enough of these little carry guns. And for good reason, too; slim fits inside the waistband better. Heck, these little guys will often fit in a pocket. And if it’s comfortable it’s far more likely to get carried. Needless to say, a carried sub-compact beats a left-at-home full-size version every time. 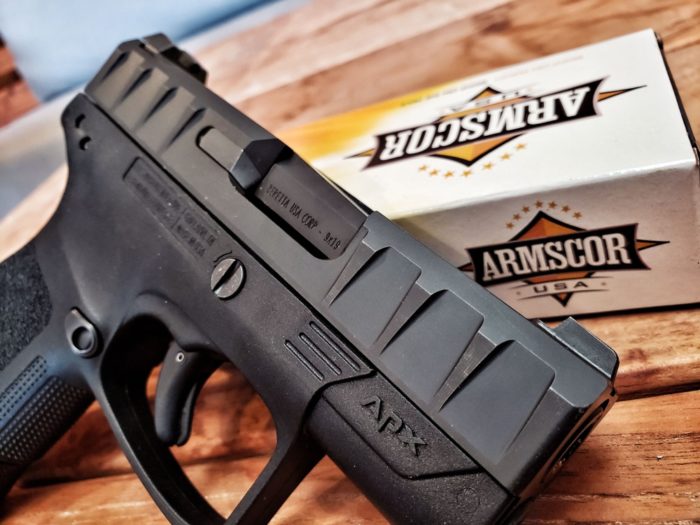 Those distinctive APX aesthetics were obviously high on the list when Beretta designed the APX Carry. What would an APX be without those large slide serrations? Certainly not anything immediately recognizable as a member of the APX tribe.

I must say, though, I’m not the biggest fan of the signature APX slide treatment. The look has grown on me a lot, but it’s the function that I’m not completely sold on. Only the top half of the “lands” are raised enough to provide any real purchase, and obviously the “grooves” are slick. The edges aren’t particularly sharp, either, and the end result is serrations that look extremely aggressive, but provide less traction than most slide serrations. Forget wet or muddy or gun-lubed, just a modicum of moist sweat and you’ll find the slide slippery. 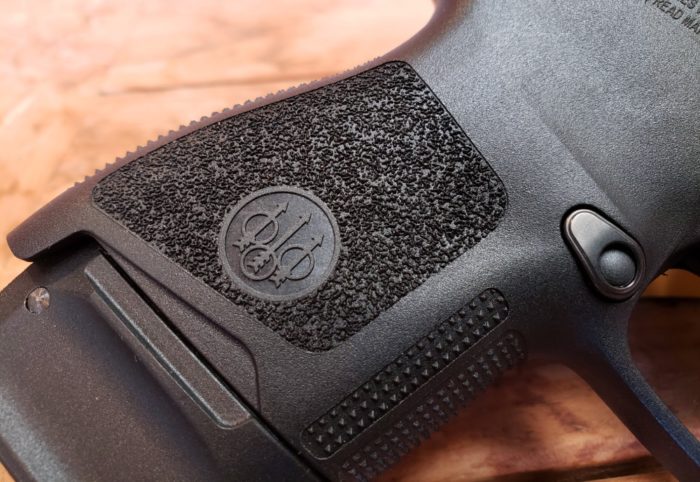 The grip texture is much better. In keeping with its bigger siblings the APX Carry’s grip texture is pebbled on the sides and more aggressive on the front- and back-strap. Little pyramids, basically. They poke right into your flesh and won’t allow the grip to rotate in your hands. Meanwhile, the pebbled side texture won’t tear up your love handles. 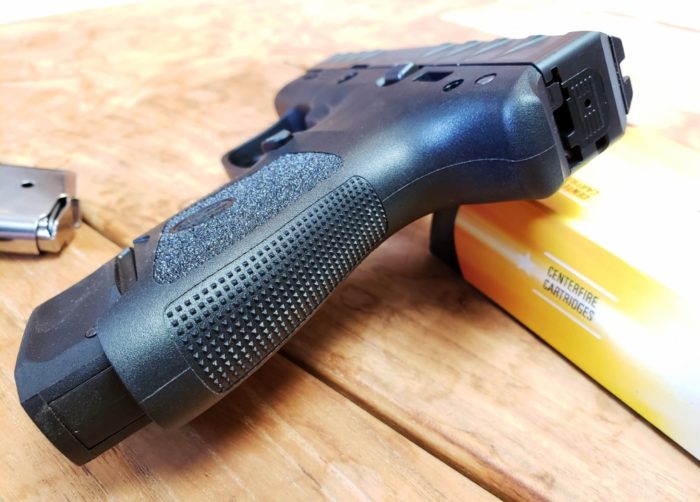 Though skinnier, obviously, the shape of the grip borrows from the rest of the APX line as well. Perhaps a slightly more pronounced hump at the heel, but the grip angle and shape have some clear similarity. Overall the double-stack APX brethren are more comfortable in the hand and more ergonomic than their single-stack baby brother, but that’s to be expected.

Also worth noting: there are no interchangeable backstraps on the APX Carry. It’s one-size-fits-all. And that size is small. 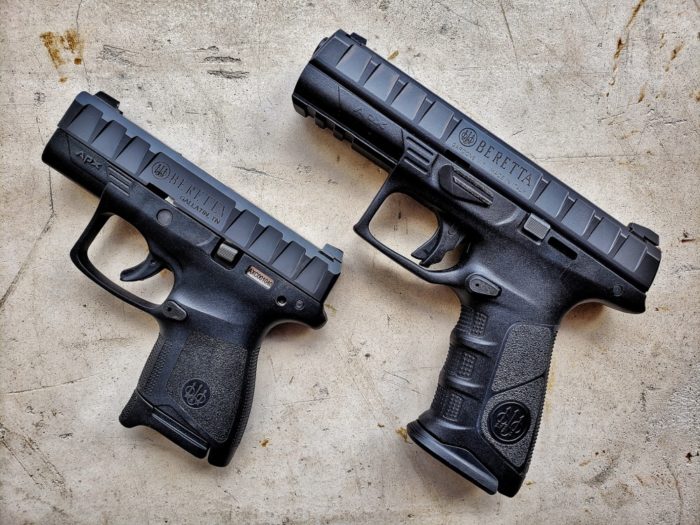 Other similarities abound, such as the serialized internal frame design and the general location and design of the controls — slide stop and magazine release. Though the Carry doesn’t have an ambidextrous slide stop like the big boys, its magazine release, like theirs, is reversible. 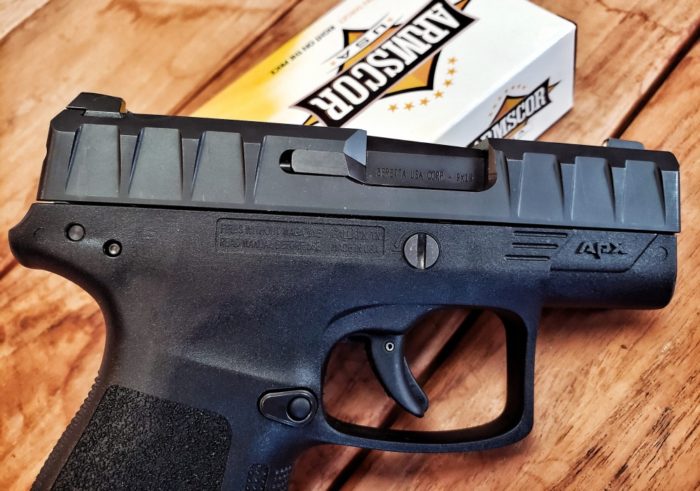 One notable difference is in the take-down. To field strip the APX Carry you’ll need to de-cock the striker. This can be done by dry firing (which some owners object to) or by Beretta’s suggested, preferred means of depressing the striker deactivation button (second “pin” from the far left). With that done, simply rotate the take-down pin 90 degrees counter-clockwise.

The slide then springs forward slightly and can then be pulled off the front of the frame. While too stiff for a fingernail, the rim of a cartridge, a coin, a screwdriver, or many other objects can be used to turn the take-down pin. 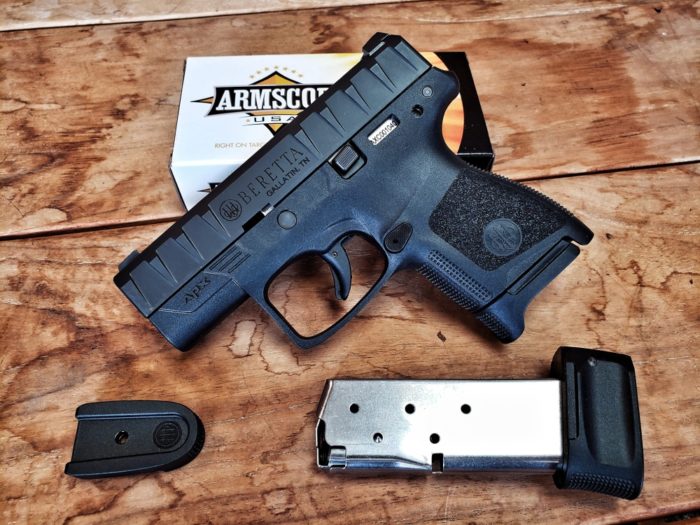 The Beretta APX Carry ships with two stainless steel magazines and three baseplates (“mag bottoms”) — flush, pinky rest, and extended. Capacity with the flush or pinky rest baseplate is 6+1 rounds of 9mm, and with the extended baseplate it’s 8+1 rounds.

For me the pinky rest fell a bit short. Literally. About 1/3 of my pinky fits on it, which felt more awkward than not having it at all. Dan’s pinky finger was half off the thing, too, and he’s always commenting in his reviews about how his hands are on the small side. If it doesn’t fit at least most of your average pinky, it should probably be longer. 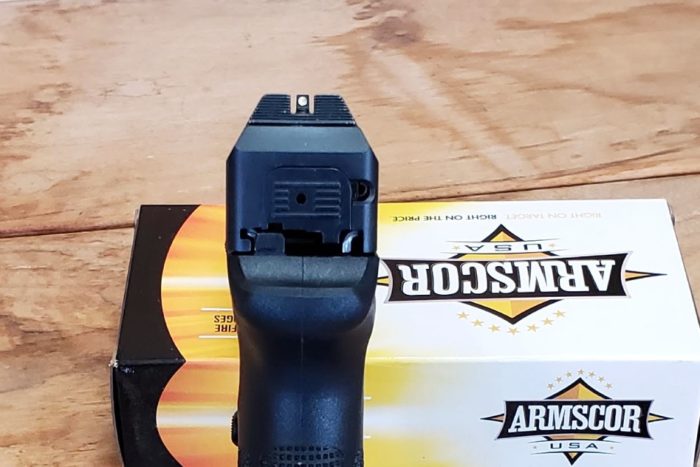 The steel sights are excellent, suiting my tastes for a blacked-out rear and a more highly-visible front. Their shape blends with that of the slide perfectly and their height is more usable than that of many micro pistols’ sights. I also liked the width of the front compared to the notch in the rear — enough light to make the sights fast for self-defense while still capable of precision when desired. 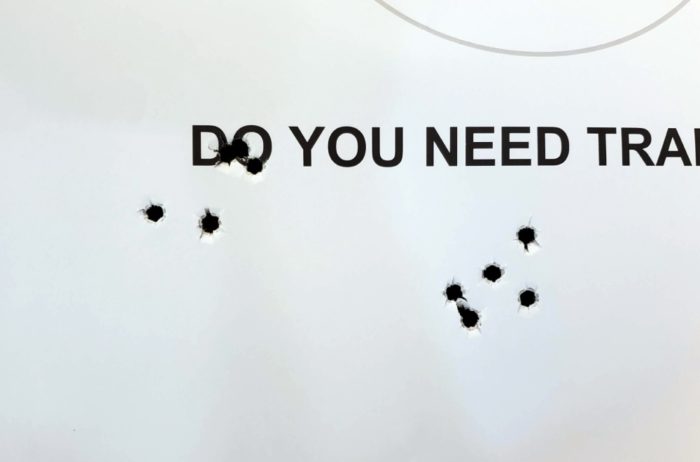 And precise the APX Carry is. For its size it’s a heck of a shooter, putting up pretty tight 5-round groups for me at 15 yards from standing.

Mechanically, I’m positive the gun is capable of better. Like the three holes in the “DO” seen above. The Carry’s trigger may hold some shooters back from achieving ultmate accuracy. 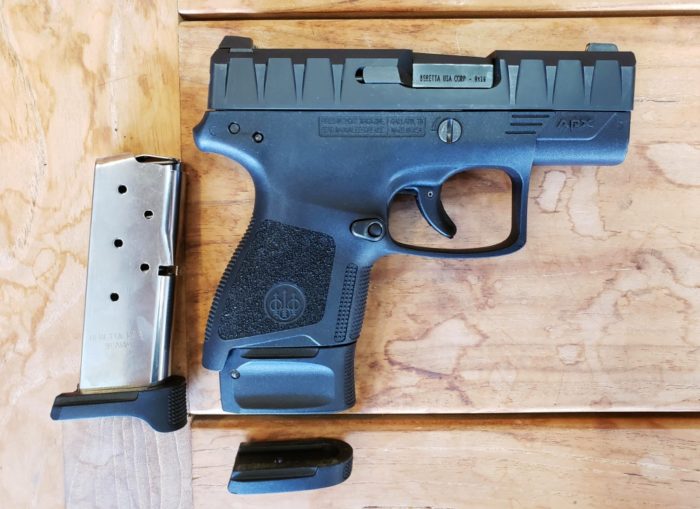 Mostly, it’s just long. The trigger has to travel basically from where you see it above almost entirely back to the rear of the trigger guard before it breaks. It’s smooth, not gritty at all, but it does transmit the sensation of the striker spring being compressed as you go.

Which, of course, accounts for much of the APX Carry’s 6- to 7-lb trigger pull weight. I don’t take any exception to this or the travel distance, mind you. For many concealed carry and self-defense situations a longer, heavier trigger pull is the better choice. In fact, the APX Carry’s trigger is very much like that of a typical double action revolver’s, just springier and lighter.

What the APX Carry’s trigger isn’t like is the rest of the APX line. Those pistols have fantastic triggers; extremely short and crisp with a super-short reset and a pull weight a couple of pounds lighter. 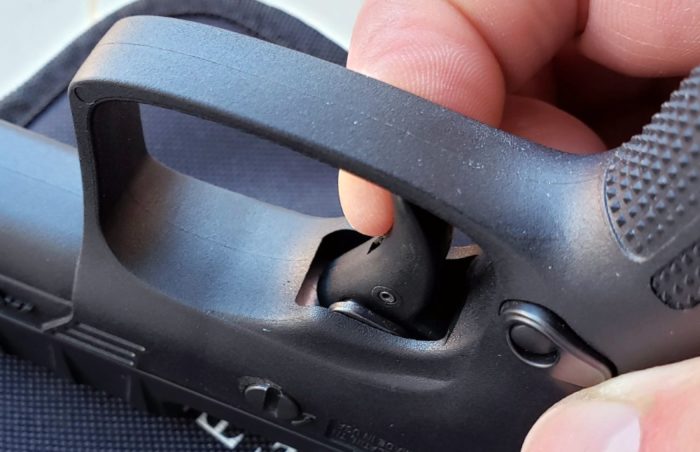 The big APXs also don’t pinch my trigger finger like the little APX does. Due to the diminutive size of the APX Compact and the somewhat forward-raked angle of its trigger when at rest, I found my finger occupying most of the trigger’s real estate, including up near the top. The sides of the trigger opening scraped and scratched some. 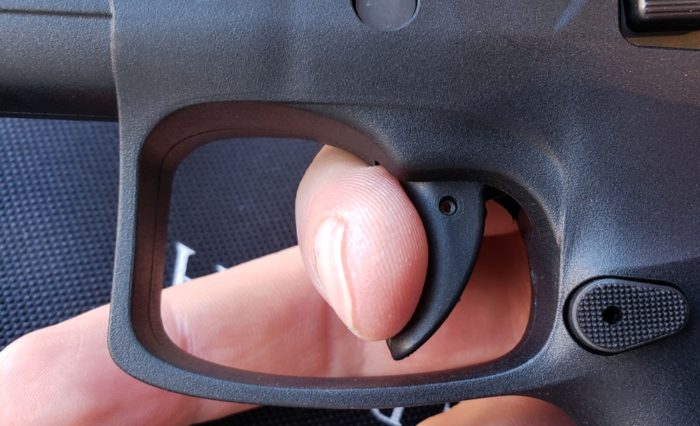 And depending on my finger position, the front of it would pinch. And those edges are sharp.

I compensated by running my finger a little lower on the trigger shoe and made it through the full testing session without any real issue.

So, then, nothing about the trigger makes it my favorite part of the APX Carry. Although I do think having the option of a longer, heavier trigger than what has become more commonplace these days is an important one. It has a place, and is a good choice for many carriers. 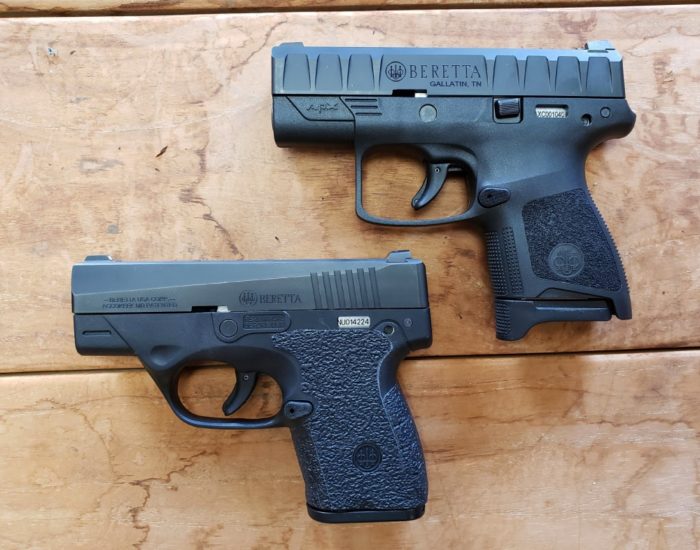 I carried a Beretta Nano for many years. I chose it in part because of that same trigger. I wanted longer and heavier; something I wouldn’t accidentally try to “stage” during a self-defense use.

While maybe not a market favorite, the Nano has a following and it sure suited me well. It’s sleek and slim, surprisingly accurate and soft-shooting. After some initial teething pains it proved itself to be eminently reliable and durable, and my example has fired thousands of rounds of every kind of ammo on the planet and has never hiccuped. 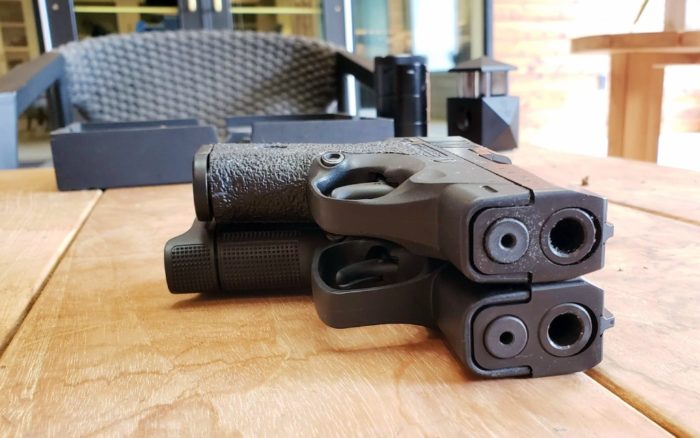 Which is one reason I was glad to see that the APX Compact’s similarity to the Nano is more than just skin deep. Actually, the skin is almost the only difference.

For all intents and purposes, the Beretta Nano and the Beretta APX Compact are effectively the same firearm. 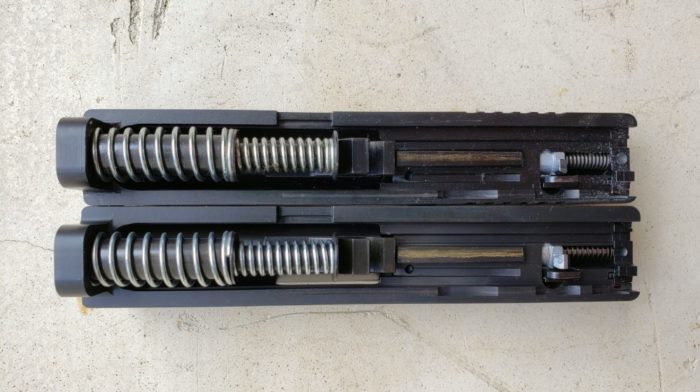 They share the same magazine, barrel, recoil spring, and so much more. The serialized, internal, modular frame can be swapped (*mostly). 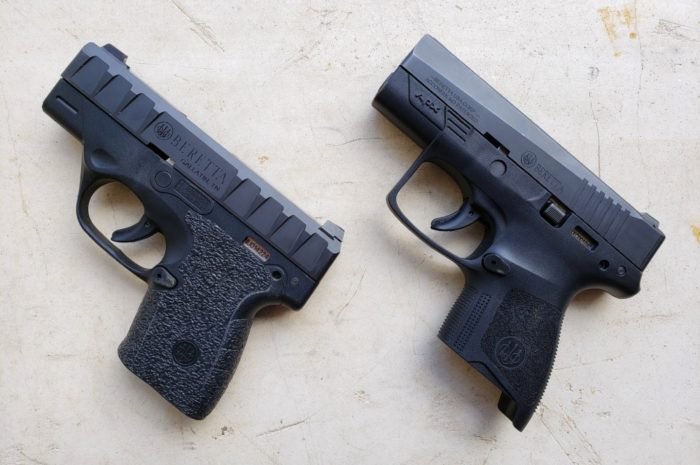 The slides swap flawlessly and, yes, they feed, fire, and function as normal this way, too.

The only hitch in this complete interchangeability is the addition of a slide stop on the APX Carry — the Nano doesn’t have an external control. But it does have the internal components. A Nano owner could install his or her serialized frame into an APX Carry grip module and run it as-is, with no slide stop, or could add the slide stop to their frame should that become something Beretta sells separately.

Now this is the modularity we Nano owners were promised. Not just new colors, but different frames entirely. A Nano owner can now upgrade to APX Carry status, whether that’s just a grip module swap or the slide, too. 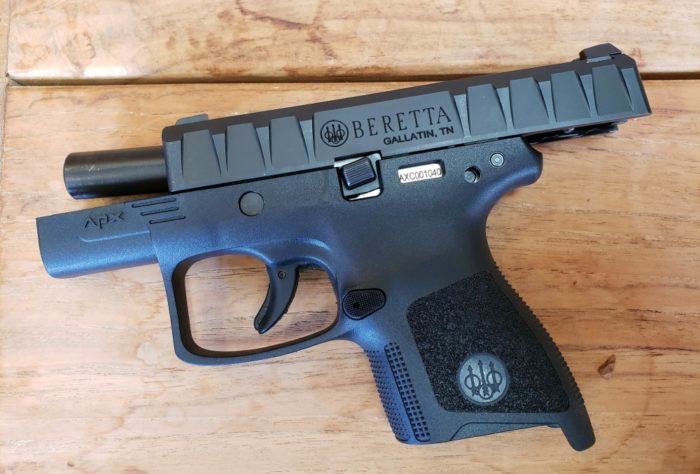 And an upgrade, it is! The APX Carry is a much-improved pistol over the Nano, due primarily to its excellent ergonomics. Its grip shape and texture (as in, it actually has some) are far superior, its higher beavertail allows a higher grip and vastly reduces the absurdly high bore axis, the slide stop is a welcome addition and is so well-recessed in the grip module that even fans of the Nano’s sleek sides won’t begrudge it. Oh, and the Carry’s sights are far better, too. 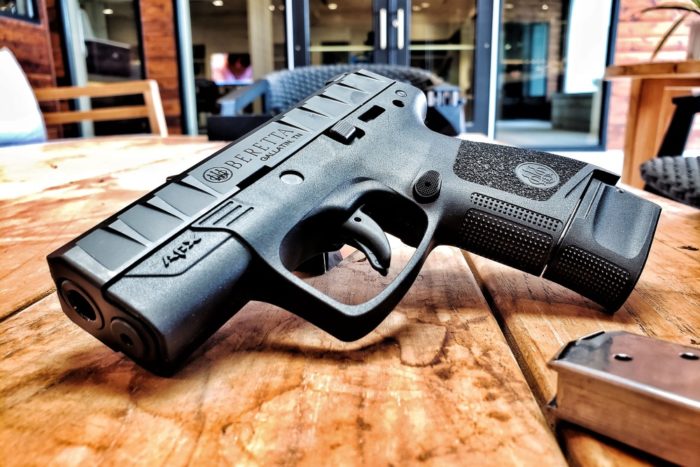 Overall, trigger pinch aside, which you may or may not experience, this is a very good little gun. While I’m no longer wanting that heavier, longer trigger on my CCW piece, I believe it’s a completely valid option and, in a market that has mostly moved in the other direction, the APX Carry fills an important niche with it. 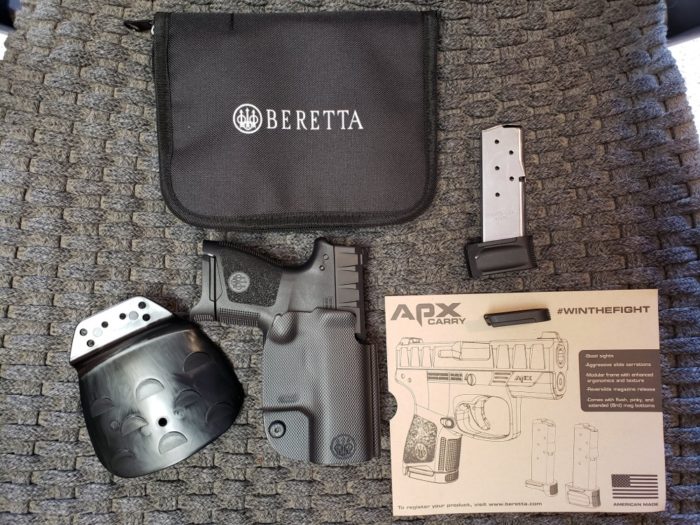 After chewing up and spitting out hundreds of FMJ and hollow-point rounds — mostly Armscor 147 grain and 115 grain mixed in with some IMI and Federal hollow-point — I found the APX Compact completely and totally reliable. It’s controllable and soft-shooting, especially for a gun its size and weight. It offers even more confidence and comfort than my Nano thanks to much better grip texture and improved ergonomics.

Quality, fit, and finish are very high on this made-in-Tennessee pocket pistol. If you’re interested in a longer, more double-action-like trigger pull from your sub-compact concealed carry piece, the APX Carry is a must-see. 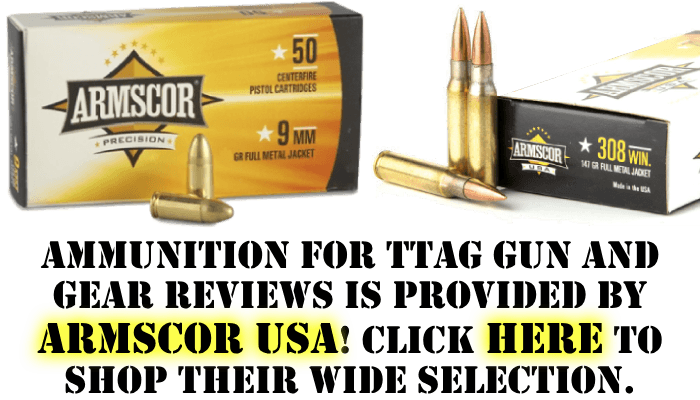 Ratings (out of five stars):

Ergonomics * * * *
Great grip texture and shape. Controls are in the right places. Dinged one star for that pinchy trigger slot and the pinky rest that’s a hair too short. At only 0.9-inches thick with a short grip frame to boot, carry ergonomics are excellent.

Customize This * * * *
With the serialized internal chassis, the sky’s the limit on customization. One could make a completely different firearm with it and never step foot in an FFL or gunsmith. But other than grip frames in different colors, different sights, and various holsters, what will actually become available for APX Carry customization? Time will tell.

On The Range * * *
The APX Carry is a very good little shooter. It’s controllable and accurate, as long as you can pull through that trigger while keeping the sights on target. That’s do-able with some practice. There may be a pinch on that trigger finger, but I quickly learned to avoid it. I’d give it four stars here if they managed to shoehorn more rounds into the thing without changing its footprint.

Overall * * * *
For me the Beretta Nano was always a 4-star gun, and the APX Carry is a marked improvement over that gun in nearly every way. It falls short of five stars, though, due to the trigger pinch, the slide serrations, and a lower capacity than some of its competition. 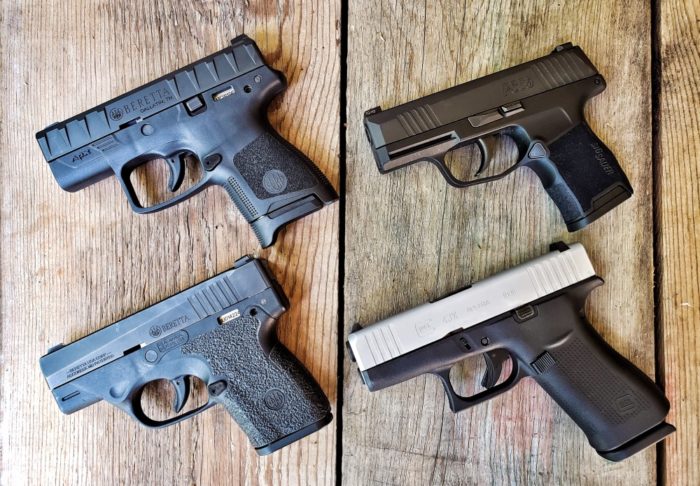 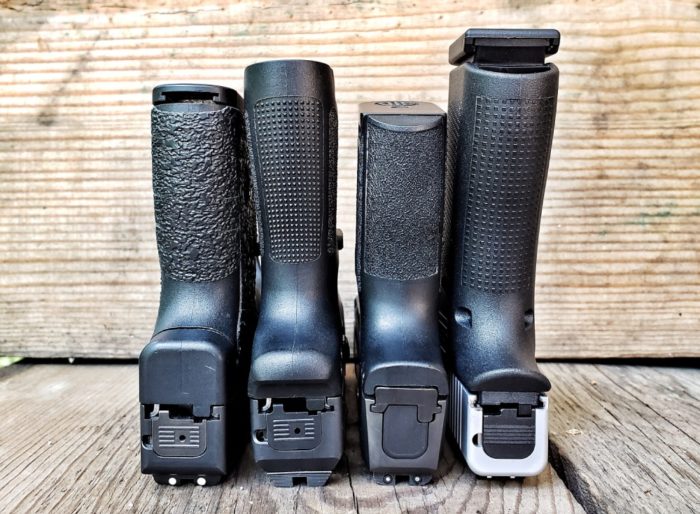 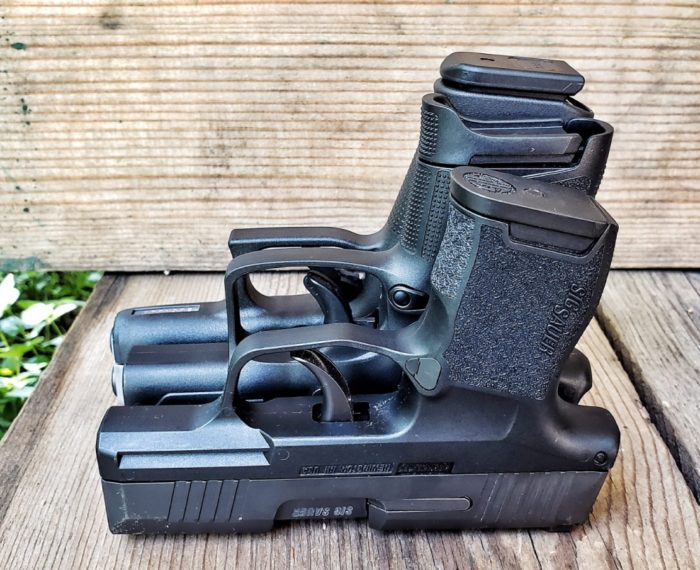